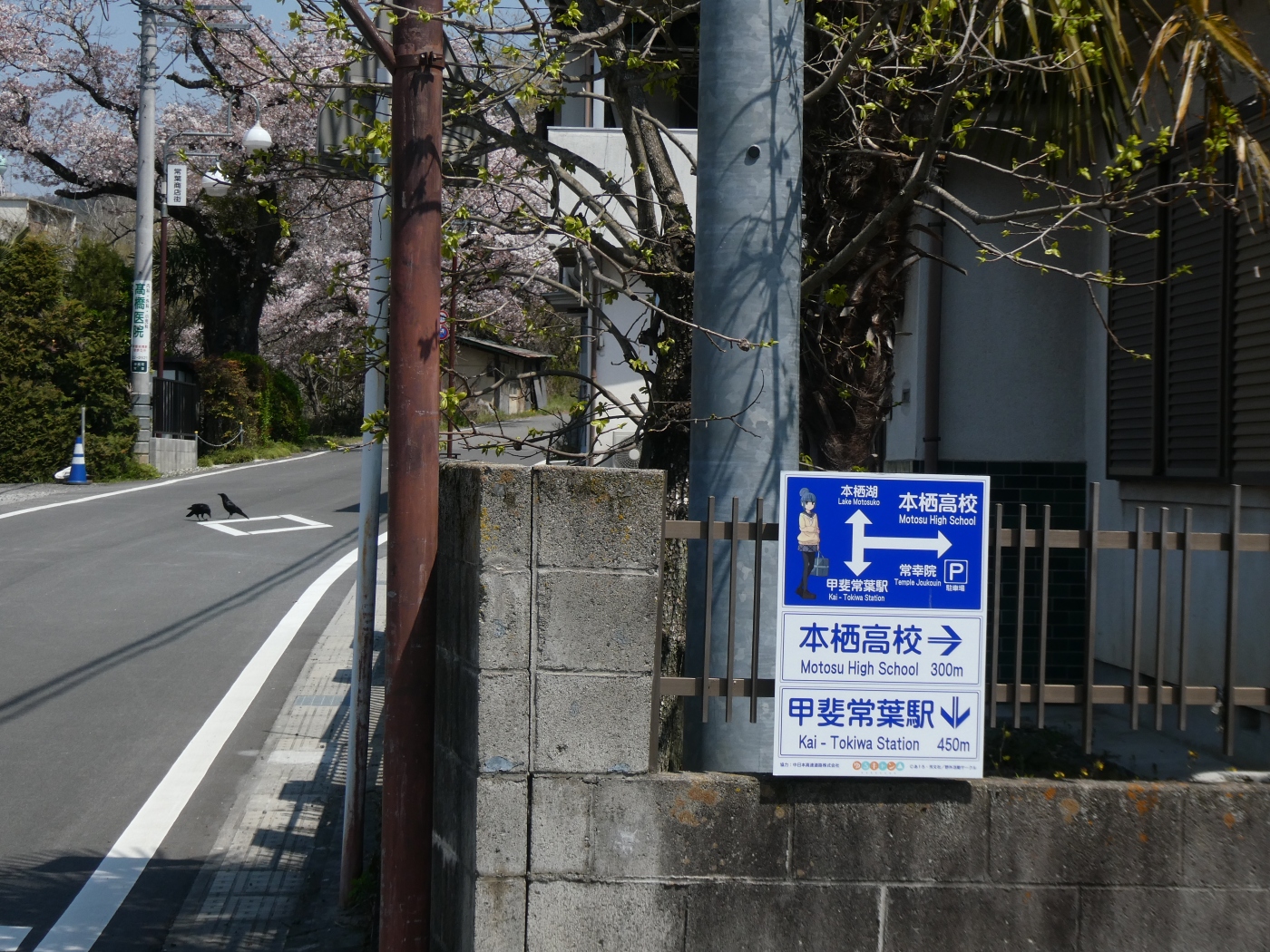 It’s probably worth mentioning that the school is closed, and has been for a while. While the name on google maps does say “Motosu High School”, this isn’t the schools real name. It was only changed to that after it started getting a lot of visitors due to Yuru Camp. I was told by someone that Japan’s countryside towns are facing a depopulation issue, as more and more younger people are migrating to the cities and leaving their .little villages behind. I’m guessing it could be due to that. I think there’s still hope for these places though. The success of Yuru Camp and Non Non Biyori are proof of that.

After my little break I headed up the road to the school. On the hairpin is this shot.

It looks like they changed up the scenery a bit for the anime. Maybe Afro took inspiration from the photos irl and that got translated into the show.

In the picture above you can see a sign on the outside of the hairpin. I was walking towards it when two cars came screeching to a halt next to me. Three people got out of the cars, and one started talking to the other two about the sign. I heard “Yuru Camp” being uttered several times. They paid no notice to me though, and I was standing right there with my huge backpack. But then they did. After letting them know I only spoke English, they asked if they could interview me. Turns out the two people are a mini news crew from YBS, the local Yamanshi news channel, and the other guy I think was a local showing them around.

They asked me in very broken English lots of questions about Yuru Camp, where I was from, what I was doing, etc. I guess they thought it was impressive that a guy from Jersey, with a huge backpack, came all the way just to check out this tiny village for Yuru Camp. Unfortunately I didn’t ask them when my interview was going to air, so I’ll probably never get to see it. If there are any Japanese-speaking people reading this, you’re welcome to try and track it down 🙂 (I got interviewed on Wednesday the 8th of April 2020)

Anyway, after the interview, with the news crew still pointing their camera at my ass, I walked a few paces up the hill to take this shot.

Then I reached the school at the top of the hill.

The building to the left last year was covered in pictures of Yuru Camp screenshots. They’d all been removed though 😦

Anyway, right at the entrance of the school is a shot that doesn’t match exactly, but definitely inspired where the girls from the outdoor activities club set up their cheapo tent. In fact, pretty much the whole school sort of inspired the shots in the anime/manga. The layout of the school is pretty different, not to mention Afro added a few more stories to the building. And the super narrow club room doesn’t actually exist.

The outside area – where the girls do their “club activities” – looked like it hadn’t been used in a long time. And it didn’t exactly match the scenes from the show either. The skyline with the hills sorta matches though. Kinda.

After that I headed out of the school and snapped this shot.

Just down the hill next to the vending machines.

Then I walked back through the village.

As you can see from the bus stop sign, the real name of the school is Shimobe High School.

Then I headed to the station, where I needed to wait about half an hour for my bus.

While I was sitting on the railing next to the road, that news crew pulled up in their car again and started filming outside the station, pointing their camera at the Yuru Camp sign on the toilet and various other things.

Then they headed back where I came from across the river (where the flags are in the picture below) and pointed the camera directly at me. I pretended not to notice so I didn’t look strange staring straight into the camera from a mile away.

Anyway, after waiting a bit longer my bus arrived for lake Motosu. I was the only one onboard.

The road up to the lake was very windy, very steep, and very long. I’m glad I chose to take the bus.